With these figures you can recreate the national and foreign hunting battalions of the Army of the Kingdom of the Two Sicilies, that is the light infantry.
They wear the new uniform introduced in 1859 to replace the giamberga (the tunic).
The figures are with country equipment (bottle and tascapane), they have pants stuffed in the leggings and not and shakò covertato and no.
In fact not all battalions received the new uniform. Certainly they received it from the 13th, 14th, 15th, 16ths of the year (ie those of new creation) and the 3 foreign carabinieri battalions. It is very likely that even other national battalions have received it, but we can not say with certainty what.
Although the tunic was considered a uniform high heel was allowed during the southern campaign to wear it in battle for its comfort, so often it was worn in combination with big pants. The practice of putting the trousers in the leggings was formalized in the Bourbon army in 1859 when in fact larger and larger leggings were distributed. The shakō is the last type, that is, a slightly inclined and small conical trunk introduced in 1857. The armament consists of stitched carbines and a yatagan knife-baionette saber.
Many of these battalions took part in the main clashes of 1860. The 8th battalion was present at Calatafimi. Many others including the 3 foreigners were on the Volturno, fought on the Garigliano at Formia di Gaeta and defended the Kingdom until the end. They formed the main frame of the Bourbon army. 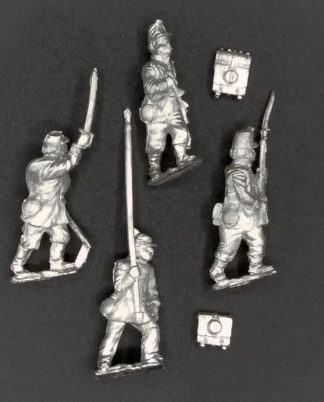 You're viewing: Command Bourbon Chasseurs in frock coat with kepi – Type1 7.00€
Add to basket
We use cookies to make sure you can have the best experience on our site. If you continue to use this site we will assume that you are happy with it.OkPrivacy policy